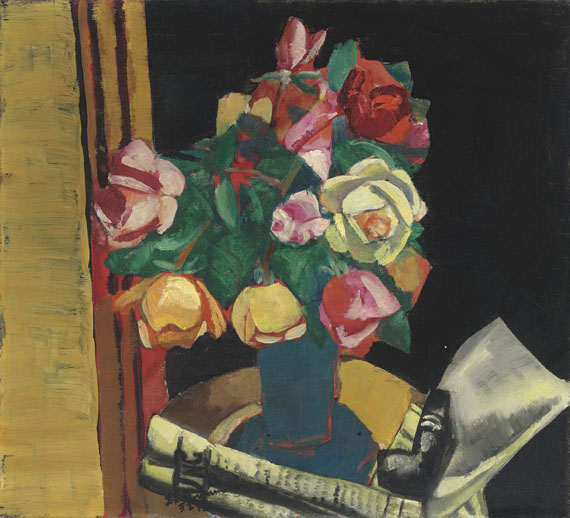 LITERATURE: Friedrich Sack, Max Beckmann. Ausstellung in der Jungen Kunst, in: Braunschweigische Landeszeitung, January 1929.
"Space – space – and space again – the infinite divinity that surrounds us and of which we are part. This is what I seek to form through painting.“

Next to apocalyptic figure scenes, still lifes have been a common genre in Beckmann's pictorial work since the end of World War I. In these works he decisively continued to develop the traditional art-historical subject, adopting it as his own with his typicalsummary style that is characterized by a broad and energetic brushstroke. Next to the large-size figure scenes, the still life is, from an art-historical perspective, regarded as Beckmann's key competence which would play a major role until the end of his life. By means of the still life Beckmann step by step explores the world around him pictorially, from that point on he also integrates the still life as an attribute in his multi figure scenes. For this reason it is little surprising that a large part of Beckmann's still lifes, through which the artist attained his characteristic style in the second half of the 1920s, is in possession of renowned public collections today, among them the "Grosses Stilleben mit Musikinstrumenten" from 1926 (Göpel 257; Städel Museum, Frankfurt a.M.). With "Stilleben mit Zigarrenkiste"(1926; Göpel 264), "Champagner-Stilleben" (1929; Göpel 311) and "Sonnenblume" (1930; Göpel 324), the Bavarian State Painting Collection is in possession of three still lifes from around 1930. Other works worthwhile mentioning are, among others, the "Grosses Fisch-Stilleben" at Kunsthalle Hamburg (1927; Göpel 276), the "Stilleben mit Apfel und Birne" at Kunsthalle Bremen (1928; Göpel 283) and the "Stilleben mit Weingläsern und Katze" from 1929 in the collection of the Country Museum of Art, Los Angeles (Göpel 310). Just as it is the case with our "Stilleben mit Rosen" Beckmann often stages objects from his domestic surroundings in a remarkably balanced composition. Towards the bottom the composition is bordered by an arrangement of the artist's pipe and, presumably as a reference to the work's place of origin, an issue of the newspaper 'Frankfurter Allgemeine Zeitung'. The work's special appeal lies in the contrast between the black background and the bright red bouquet of roses in the foreground. The truncated mirror in right, a common element in Beckmann's still lifes, provides the necessary connection between the abstract background and the detailed flower arrangement in the foreground, adding a suspenseful balance to the composition. From September 2014 to January 2015 the Kunsthalle Hamburg dedicated an extra exhibition to Max Beckmann's still lifes, which are a central theme in his work from the beginnings through the time of World War I, the Frankfurt days, the exile in Amsterdam up until his last years in the USA. [JS]
More Information
+
Sell
Get a free appraisal for a similar object!
+
Register for
Max Beckmann
+
Buying from A-Z
+
Contact a specialist
+
Max Beckmann Biography
Share