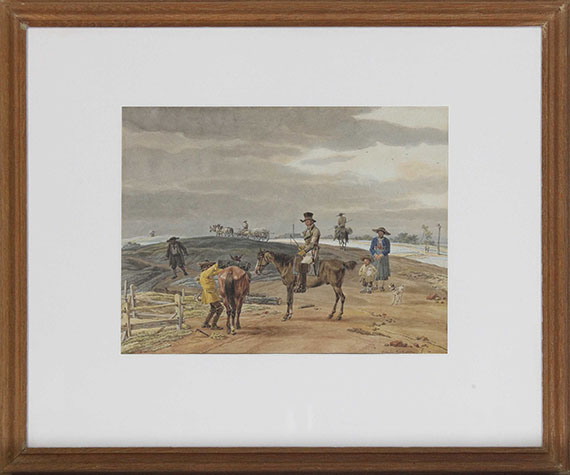 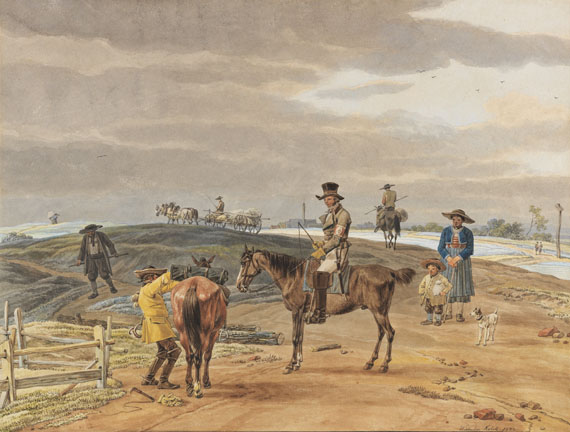 We are grateful to Dr. Claudia Valter, Germanisches Nationalmuseum, Nuremberg, for her kind expert advice.

Kobell made the neatly executed watercolor in 1802 while he was living in Munich for a coupleof years. In 1797 he married Anna Maria Theresa von Krempelhuber, together with their five children they spent the summers at the country estate of his father-in-law onAmmersee (Lake Ammer). In the Upper Bavarian landscape he found his motifs, over the time illustrations of local countryfolk became his main motif and the so-called ’Begegnungsbild’ (a genre of pictures with scenes of encounter), would coin his work over the following decades. While Kobell reduced colors and motifs in later pictures, his earlier works are characterized by people in a lively get-together. In these works he integrates the figures in the landscape instead of placing them in front of a low horizon, almost like silhouettes, as it is the case in his later works. Despite their accurate account of reality, his depictions of everyday scenes show atmospheric idyls. The watercolor offered here shows a post rider in a yellow dress with a post horn. Dismounted from his horse, he searches his knapsack, a rolled leather pouch, for letters, in order to hand them over to the waiting couriers. The silhouette of a city is suggested in background, which presumably is Weilheim (cf. Wichmann 483-485). In 1903 Rudolf Bangel raves about the high quality of the watercolor, calling it a "splendid and most thoroughly executed sheet", "harmonious […] of distinct graphic mastery and perfect execution".
More Information
+
Sell
Get a free appraisal for a similar object!
+
Register for
Wilhelm von Kobell
+
Buying from A-Z
+
Contact a specialist
Share