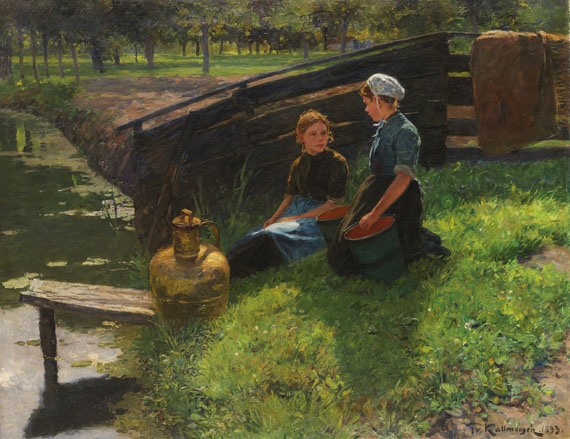 Essay
In 1881 Kallmorgen visited the Netherlands for the first time, until 1913 he made at least 15 study trips there. Impressions gained found reflection in many examples from his oeuvre. In 1919 the artist noted about his time in Volendam in 1889 in his memoirs: "It felt like being in a different world. The small houses nestled behind the dike, the tall people in their simple costumes on the dike and the harbor bustling with ships, bulky and strong boats with dark brown sails. As it was the case so often, I was riveted by the groups of fishermen with their characterful heads, by the playing children or by the girls folding their hands for the Angelus prayer. Back then there were hardly any strangers, apart from a couple of painters, accordingly, the elderly were reticent, only few of them were willing to be 'uitteekenen' or 'uitschildern' (painted), while the young children were happy to do so for just a few Cents. In terms of landscape there was not much to gain here, but it was a strange but beautiful place for figure studies. A finer place for a painter is hard to imagine." (Quote after: Sylvia Bieber, 'Man war wie in eine andere Welt versetzt'. Friedrich Kallmorgen in Holland, in: ex. cat. Friedrich Kallmorgen, Karlsruhe 2016, p. 51). The motif of the 'Sommernachmittag' (Summery Afternoon), was entirely painted plein-air during a stay in Rijsoord. A draft can be found in the sketchbook from the same year.
More Information
+
Sell
Would you like to sell a similar object?
+
Register for
Friedrich Kallmorgen
+
Buying from A-Z
+
Contact a specialist
Share 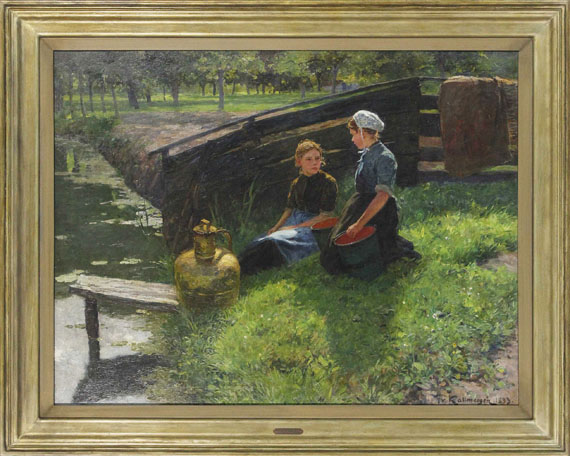