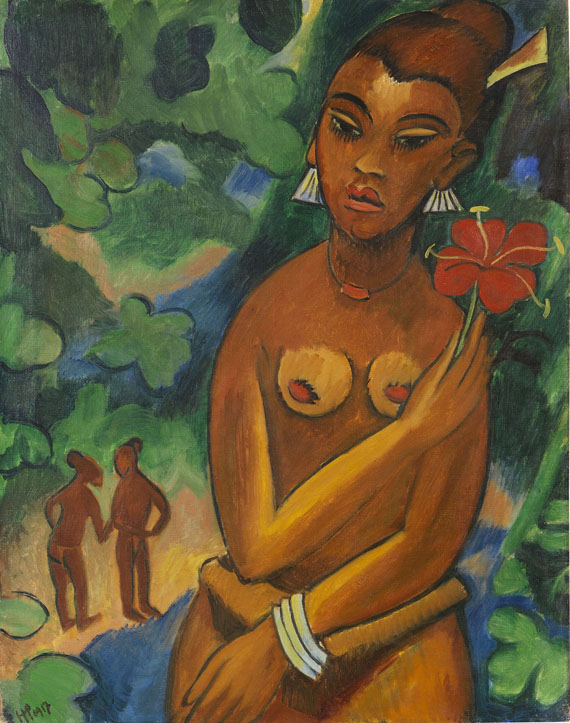 PROVENANCE: Wolfgang Gurlitt, Berlin (before 1921-1929?; according to the statement signed by Wolfgang Gurlitt in context of the dispute with Pechstein on 16 March 1923, the painting was on the list of 14 works which Gurlitt was entitled to keep as his "unverkäufliches Privat-Eigentum" (unsalable private property) corresponding the agreement from 7 March 1923).
Joseph von Sternberg, Hollywood (acquired in an art shop in Berlin in ca. 1929 (according to the auction catalog of Parke-Bernet Galleries from 1949 Sternberg acquired the painting at Galerie Thannhauser in Berlin, however, it is more likely that he bought it from Wolfgang Gurlitt, cf. Soika vol. I, p. 125) - sold through Parke-Bernet Galleries, New York in 1949).
German art trade (around 1960).
Private collection Hirschberg/Großsachsen, Baden-Württemberg (ca. 1960 - ca. 1971).
Private collection Berlin (inherited from aforementioned - since in family possession).

Essay
Between 1912 and the early 1920s the Berlin art dealer Wolfgang Gurlitt, from whose possession this painting originates, was one of the most important patrons of Max Pechstein and the progressive art of the Brücke group. He presented the first “Brücke“ exhibition in his gallery on Potsdamer Straße in April 1912 and showed 42 paintings at Pechstein‘s first solo show in January 1913. On occasion of this event Ada Nolde, wife of Emill Nolde, noted down: "Berlin is making a big fuss about Pechstein‘s exhibition at Gurlitt. He‘ll soon be crowned the darling of all Berliners." (Quote after Soika, vol. I, p. 19). Wolfgang Gurlitt supported Pechstein‘s journey to the South Sea, on which the artist embarked with his wife Lotte in spring 1914, with 10,000 Marks advanced money. In September the same year the couple arrived at Palau, a group of around 300 small islands in the Pacific Ocean. Pechstein was deeply impressed by both nature and the lifestyle of the natives. As World War I had broken out Japanese troops landed on Palau in October 1914 and Pechstein had to leave the island world where he had found temporary realization of his ideal of man in untouched nature. He wrote to his artist friend Alexander Gerbig: "The Japanese really drove me away from my paradise soon after I had come to realize that Palau exceeded all my expectations.Areal gem, but the signs of the war were there even upon my arrival." (Quote after Soika vol. I, p. 22). In this expressive work Pechstein portrayedRonmay, one of the daughters of chief Eibedul, from his memories of the paradisaical place after his war deployment. Apart from our marvelous work Pechstein dedicated several passages of his travel diary to his encounter with Ronmay. In 1927 he eventually published an erotically charged account of his painting session with the exotic beauty under the title "Ronmay mit der Hibiskusblüte" (Ronamy with the Hibiscus). The exotic appeeal of the portrayed lady, the brilliant colors and the expressive line must have been the reasons for the American film director Josef von Sternberg to buy this work in 1929 while he was shooting the movie "TheBlue Angel" with Marlene Dietrich in Berlin. Up until 1949 it was part of his prominent art collection and was shown to the public on several occasions.
More Information
+
Sell
Would you like to sell a similar object?
+
Register for
Hermann Max Pechstein
+
Buying from A-Z
+
Contact a specialist
+
Hermann Max Pechstein Biography
Share 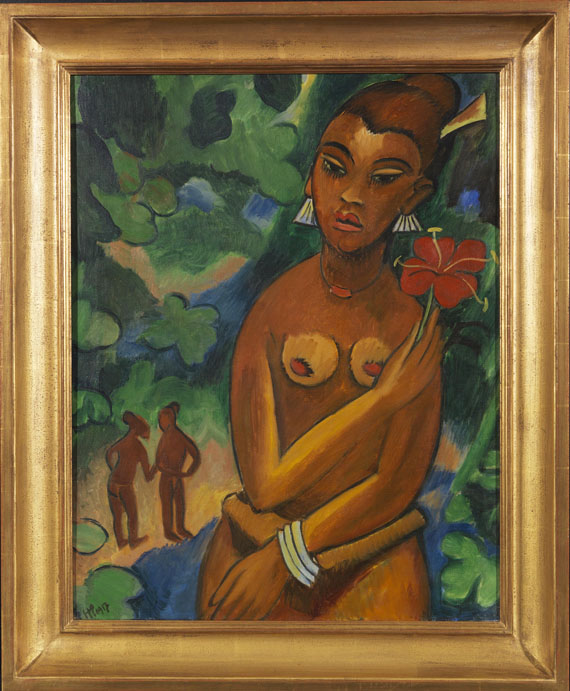