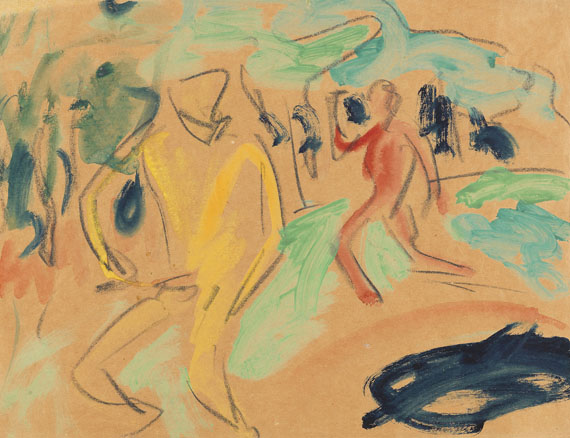 Dynamic-expressive study of bathers at the Moritzburg Lakes.
The work is registered in the Ernst Ludwig Kirchner Archive, Wichtrach/Bern.

Essay
For a long time Ernst Ludwig Kirchner's drawings received far less attention than his paintings. And yet, they are such a vital part ofhis oeuvre that they should be considered an independent complex of works, for both their range and message - hardly any of his painter colleagues made comparable graphic creations. The verve with which Kirchner swiftly renders his subjects is unmatchedin early 20th century graphic art. To Kirchner it is less about the depiction of a situation, but rather the drawing's overall effect. It is â€“ unusual enough in those days - not a mere preliminary drawing for a later painting, but a genuine part of an independent genre. Intensive occupation therewith was of great concern to Kirchner. This sheet shows all merits of his quest for an authenticity of what had been captured spontaneously. Both the dynamic of motion as well as the sure handling of a self-contained composition, which adds stability to the sheet, can be found here. At the same time the work is a prime example of his masterly handling of colors, which he introduced as a vital element of this composition.
More Information
+
Sell
Would you like to sell a similar object?
+
Register for
Ernst Ludwig Kirchner
+
Buying from A-Z
+
Contact a specialist
+
Ernst Ludwig Kirchner Biography
Share 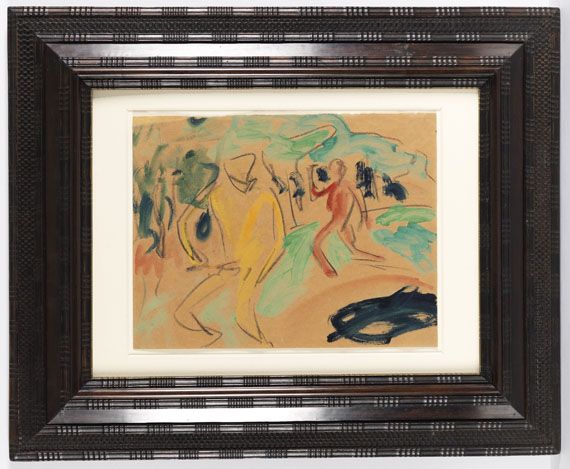