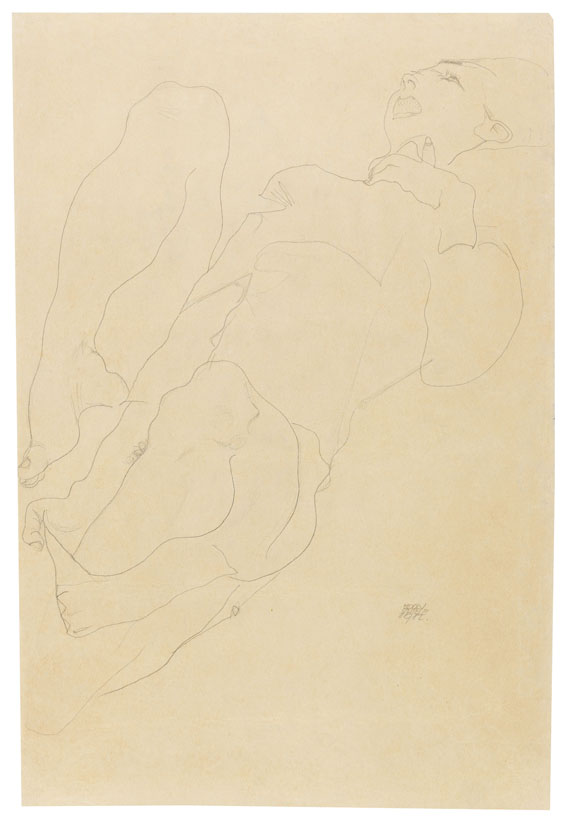 Essay
More than it is the case with his paintings, Egon Schiele was able to achieve a certain artistic clearance in his watercolors and graphic works, which would gain vital importance for his oeuvre. The relationship between painter and model had dramatically changed by the early 20 th century. The Expressionist artists of the'Brücke' group preferred young girls as their models. The formal appeal of the still adolescent body, without the rubenesque forms that still enthused the Impressionists, was in line with aesthetics that sought its fulfillment in the androgynous. Schiele followed this trend and even went a step further. He approached the model in such a direct matter that was shocking at first. His dialog with the model takes place on two levels. On the one hand there is the formal-aesthetic perspective that fixates the body in a mannered pose in order to extract a static pattern from the young life. On the other hand there is the almost voyeuristic proximity, through which the artist approaches the depicted model in the most intimate situations.
More Information
+
Sell
Would you like to sell a similar object?
+
Register for
Egon Schiele
+
Buying from A-Z
+
Contact a specialist
+
Egon Schiele Biography
Share