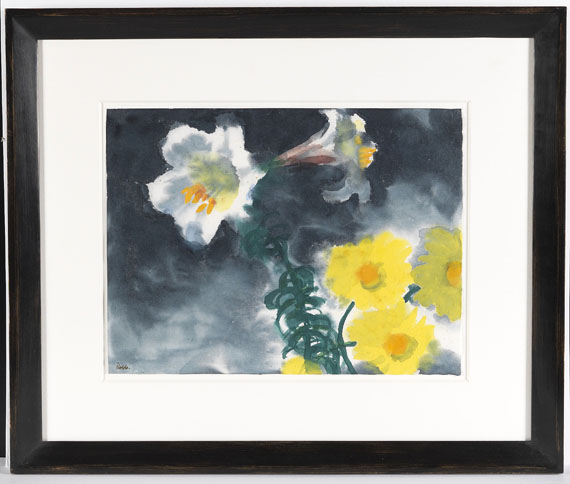 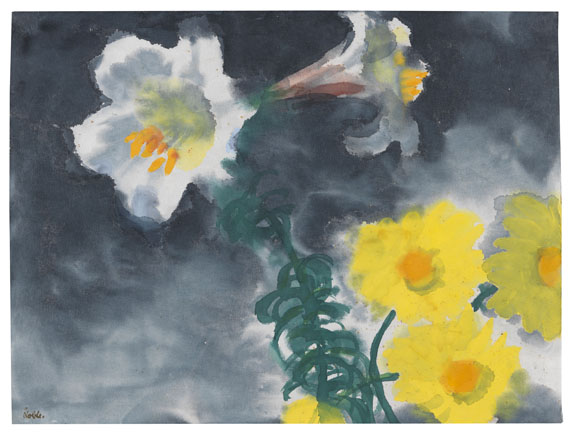 PROVENANCE: Private collection Germany (acquired from the artist in 1932).

In Emil Nolde's oeuvre the watercolors are not just the paintings' little sisters. For some time the artist was exclusively making watercolors, for instance on his trip through the South Seas, while the National Socialists had imposed an occupational ban in the Third Reich, and after 1951 when he had abandoned oil painting because of a broken arm. In this respect the watercolors are an own complex of works in his oeuvre and deserve special attention. The lush flower garden around his house and studio in Seebüll offers an abundance of inspiration: Even though he reserves some freedom of interpretation, his flowers can be exactly identified botanically. But Nolde is neither a botanist nor a flower painter. He neither makes watercolors of flower bouquets nor does he make still life arrangements. With the blossoms' splendid colors Nolde reflects on the bold colors in his early paintings. He creates every flower from the color and sets it into exciting interaction with other blossoms. Accordingly, the composition's most various blossoms use their color splendor to compete for an unmatched optical presence.
More Information
+
Sell
Get a free appraisal for a similar object!
+
Register for
Emil Nolde
+
Buying from A-Z
+
Contact a specialist
+
Emil Nolde Biography
Share