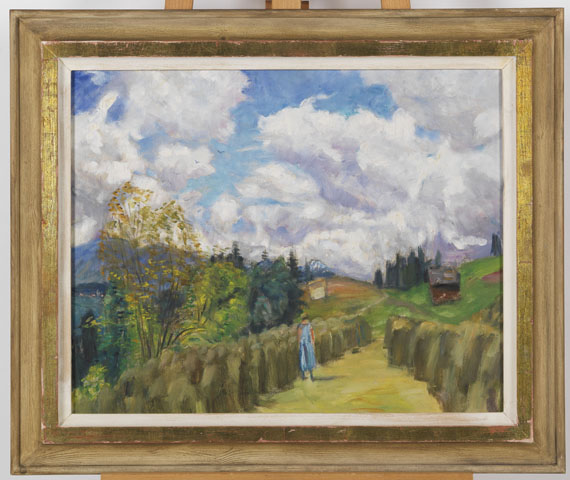 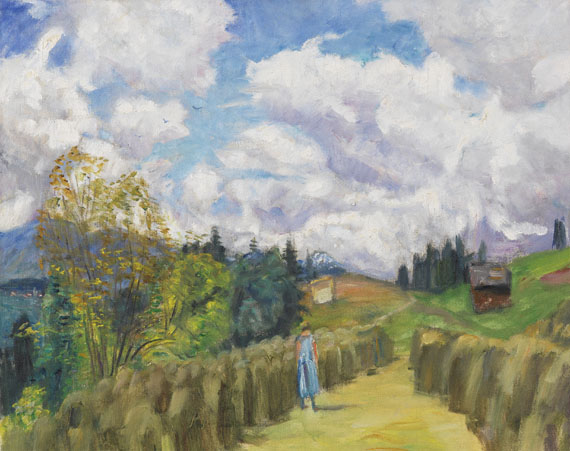 The Modersohn family moved from Soest to Münster in 1884, where Otto discovered his interest in art while still at high school. After graduating from school he went to the Akademie in Düsseldorf, but he did not agree with the teaching methods here. After a short stay in Munich Otto Modersohn hoped to find artistic inspiration at the Akademie in Karlsruhe, but was once again disappointed. A summer trip through northern Germany together with Mackensen in 1888, however, inspired Modersohn to a series of small paintings, one of the first highlights in his early years. Another joint trip with Mackensen to Worpswede in 1889 resulted in Modersohn's decision to stay in the artist colony. Modersohn soon began to disagree with his friends' ideas. He wrote "Quiet, quiet grandness is my true goal" and he would rather "say much with very little [..]". He sent eight works to the first group exhibition of the Worpswede artists at the Kunsthalle in Bremen in 1895. The reactions to the exhibition varied, but the following participation in the international Glaspalast exhibition in Munich was to be a great success for Modersohn. Paula Becker, who married Modersohn in 1901, visited Worpswede for the first time in 1897. At this time the painter was considering leaving the colony. The following period is determined by numerous trips and various sojourns in Germany and France, mostly undertaken together with his wife. The Modersohns returned to Worpswede in the spring of 1907, where Paula died in November after giving birth to a daughter. Modersohn moved to Fischerhude, where "a new time began" for him in 1908. The artist studied nature in this rural surrounding and always returned here even after repeated visits in Worpswede and Berlin in 1917. "Simplicity, reduction of form and color is one of the main goals" of his art in the 1920s. Important sources of inspiration were Holland and the Allgäu, where he bought a house in 1930.

When the painter turned blind on one eye he abandoned his trips to the Allgäu and spent his time painting in his Fischerhude studio. Otto Modersohn died seven years later after a surprising, short illness.