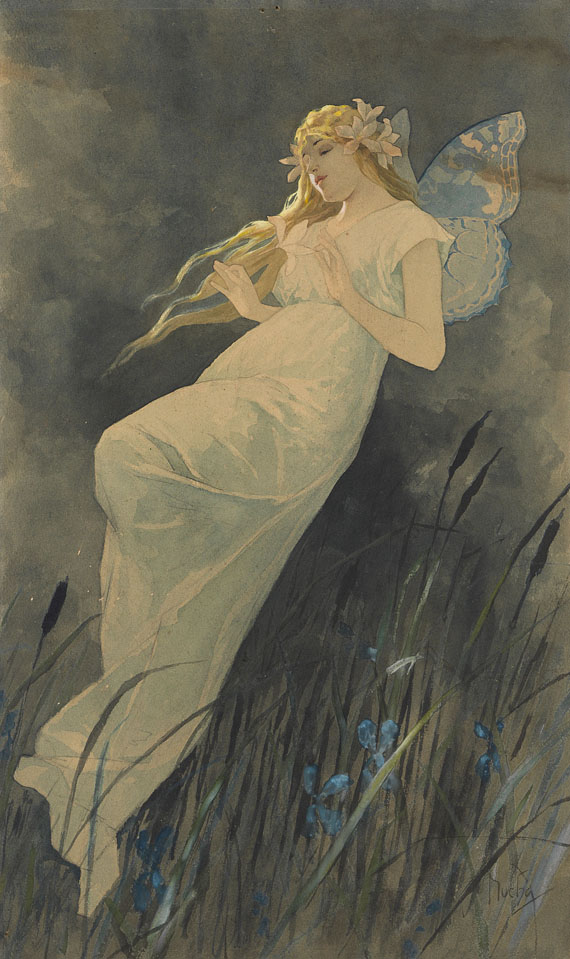 Alphonse Mucha was born at Ivancice in what was then southern Moravia on 24 July 1860. At seventeen he left home to work as a scene painter at the Ringtheater in Vienna. When the theatre burnt down, Mucha lost his job but found new employment at the castle which was the seat of Count Khuen, who became Mucha's patron and even sent him to study at the Munich Art Academy some years later. From Munich Alphonse Mucha went to Paris in 1887 to continue his studies at the Académie Julian and then the Académie Colarossi. When Count Khuen ceased to pay the bills, Mucha was forced to leave the academy and earn his own living as an illustrator. At that time Mucha did a great many sketches and drawings - studies for illustrations that were published in 'Le Figaro illustré', 'Le Petit Parisien illustré' and other journals. These early Mucha works as well as his contributions to such illustrated books as Judith Gauthier's L'Éléphant blanc, which Much was working on then, were still in the prevailing academic, historicising style of the day. However, a chance commission arranged through an employee of Lemercier, printers, to design a poster for Sarah Bernhardt in 1894 marked a breakthrough for Alphonse Mucha and earned the Czech artist a reputation as an influential Art Nouveau designer in France. Sarah Bernhardt was enthusiastic about Mucha's work and from then on commissioned him to design costumes, jewellery and stage scenery as well as posters for her productions. Since the Paris public also highly appreciated Mucha's work, he became famous, controversial and celebrated overnight. Mucha was at the pinnacle of fame in 1900. His theoretical writings, Documents décoratifs and Figures Décoratives, exerted enormous influence on the decorative and applied arts of his day. 'Le style Mucha' was the talk of Paris and such typical elements of it as arabesque-like hair and auréole surrounding a female profile were widely emulated. Alphonse Mucha participated in the 1900 Paris Exhibition, creating a general stir with his wall decorations for the Bosnia-Herzegovina pavilion. In 1904 Mucha went to America, staying for some time in New York to execute wall decorations, stage scenery and portraits as well as drawings and compositions for the Chicago Art Instititute, where he also taught. Shortly before the outbreak of the first world war, Much returned to his native Czechoslovakia. He devoted some time to lithography there before turning to a sequence of twenty large paintings entitled 'L'Épopée slave' ['Slav Epic'] that increasingly took up his time. Mucha did the large-scale (6 x 8 m) sequel for the Bosnian pavilion in 1928, which he presented to the city of Prague. Not long after German troops invaded Czechoslovakia to annex Bohemia and Moravia on 16 March 1939 under the terms of the 1938 Munich Agreement, Alphonse Mucha died in Prague on 14 July 1939. [CB].