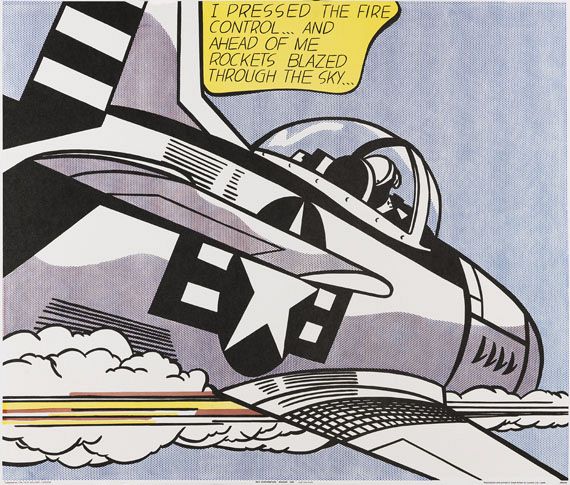 Roy Lichtenstein was born in New York on 27 October 1923. In 1939 Lichtenstein began with his studies at the Art Students League with Reginald Marsh as his teacher, one year later he moved to the Ohio State College, where he returned to after a three year military service in Europe between 1943 and 1946 for further three years. Following this he began working as a teacher at the Ohio State College until 1951. During the following three years Lichtenstein lived in Cleveland, where he practised, aside from painting and drawing, several occupations until he moved to New York in 1957, where he continued working as a teacher at the New York State College of Education in Oswego. Whereas fairytale-like motifs in primitive figurativeness dominated his work during the early 1950s, Lichtenstein turned to contemporary image contents in the mid-1950s. In 1962 Lichtenstein participated in the first big Pop-Art exhibition 'New Realists' at the Sidney Janis Gallery, New York. Two years later his first exhibition in Europe took place at the Gallery Ileana Sonnabend in Paris. Many exhibitions at home and abroad followed. In 1963 he received a commission by Philip Johnson, the architect of the pavilion for New York at the world exhibition in New York, for a mural to be hung up in it.

In 1965/66 ceramic works were created, at the same time he painted his first brushstroke picture. During this time his occupation with Art Déco began as well. In 1969 he started producing silk-screen prints at Gemini G.E.L's. His most famous paintings show dramatic figurative scenes in a typical American cartoon style. Lichtenstein also produced series of expressionistic woodcuts or impressionistic landscape paintings, he used the techniques of collages and played with advertisement vocabulary and abstract art. During the 1990s he discovered the female nude and Chinese landscape painting as an image object and designed several monumental works et al. sculptures and several murals. His works was celebrated in important retrospective exhibitions all around the world. Roy Lichtenstein died in New York on 29 September 1997. The memory of his motifs is kept as icons of Pop-Art.