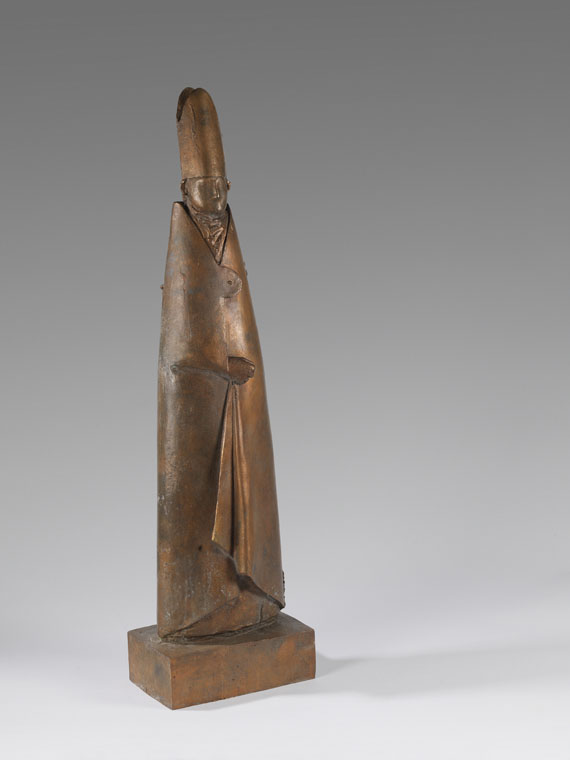 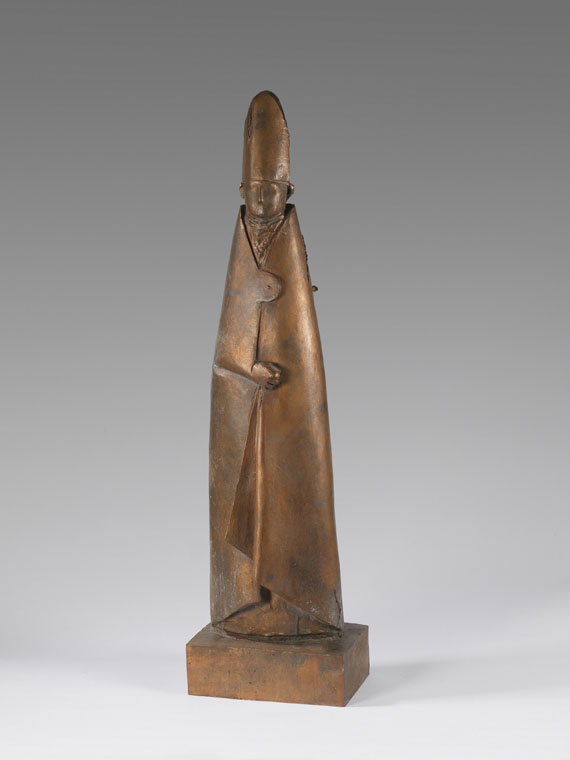 Accompanied by a photo certificate issued by Inge Manzù on 30 December, 2012. The work is registered in the Fondazione Giacomo Manzù, Ardea, under the archive number "37/2012".

The Italian sculptor Giacomo Manzù was born in Bergamo, Italy, on 22 December 1908. His surname, Manzù, is an abbreviation in the Bergamo dialect of the Italian surname Manzoni. The son of a shoemaker, Giacomo Manzù grew up in poverty. At the age of eleven, he was taken out of school by his father, who sent him to serve an apprenticeship as wood-carver so that he could contribute to the meager family income. Giacomo Manzù's talent for sculpting soon became apparent, however. In 1921 Manzù enrolled in evening courses in sculpture in Bergamo. His teacher, Ajolfi, hired the gifted young man as an employee in his sculpture workshop. About that time, Giacomo Manzù saw Aristide Maillol's sculpture in a book, which made a lasting impression on him. Deciding to become a sculptor himself, Manzù went to Paris in 1929. In 1930 he settled in Milan, where he exhibited early works of his at the group shows mounted by the Galleria del Milione. In Milan Manzù also came into contact with the painter and art theorist Carlo Carrà.
In 1934 Giacomo Manzù went to Rome. In St Peter's he was impressed by a glimpse of the pope seated between two cardinals - from that lasting impression, Manzù would develop one of the dominant motifs of his life's work. In 1937 Manzù's work was shown in Rome at the Galleria della Cometa and Carlo Carrá wrote the text of the catalogue. At the 21st Venice Biennale in 1938, Giacomo Manzù was given a room of his own to show his work. Exhibitions followed in Milan, Paris and New York. In 1940 Giacomo Manzù was appointed to a teaching post at the Accademia di Belli Arti di Brera in Milan, where Marino Marini and Carlo Carrà were also on the teaching staff. Manzù spent the war years in Bergamo. In 1947 a grand retrospective of Manzù's work was mounted at the Palazzo Reale in Milan. That same year Giacomo Manzù entered a competition to design the bronze doors of St Peter's in Rome.

The years that followed saw the production of numerous drawings and designs for them - in 1952 Manzù officially received the commission to create "The Triumph of the Saints and Martyrs" but was granted papal permission to design a "Door of Death". In 1954 Giacomo Manzù taught sculpture at the Salzburg International Summer School, where he made the acquaintance of Oskar Kokoschka. He also met Inge Schnabel, a dancer, whom he subsequently married. In 1955 Manzù was commissioned to design the main portal of Salzburg Cathedral. He was again given a room of his own at the 28th Venice Biennale in 1956. Numerous other honours and awards followed. Giacomo Manzù died in Ardea near Rome on 17 January 1991. [KP/MS]