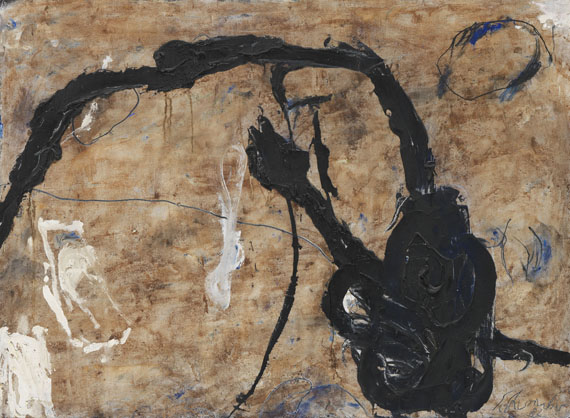 We are grateful to Dr. Ulrich Schumacher, Emil Schumacher Foundation Hagen, for the expert advice. This work is registered under the number 0/467 in the archive of the foundation and will be included into the forthcoming catalog raisonné.

Just as it is the case with this work, Schumacher’s art lives alone of the color’s expressive force and its matter. The artist takes the colors` consistency to a maximum and makes it tangible for the observer, both in haptic as well as in optical terms. Schumacher’s painting have no content, they stand for themselves, for painting itself: "Schumacher`s art is, the way we see it today, in a through and through decidedly manner just as dependent on all art -isms as it used to be in its time. It is self-explainable, as 'painting'." (Joachim Büchner, Farbe und Materie, Ausdruck und Form - Wandlungen von Wirklichkeit, in: Künstler. Kritisches Lexikon der Gegenwartskunst, edition 1, p. 3).