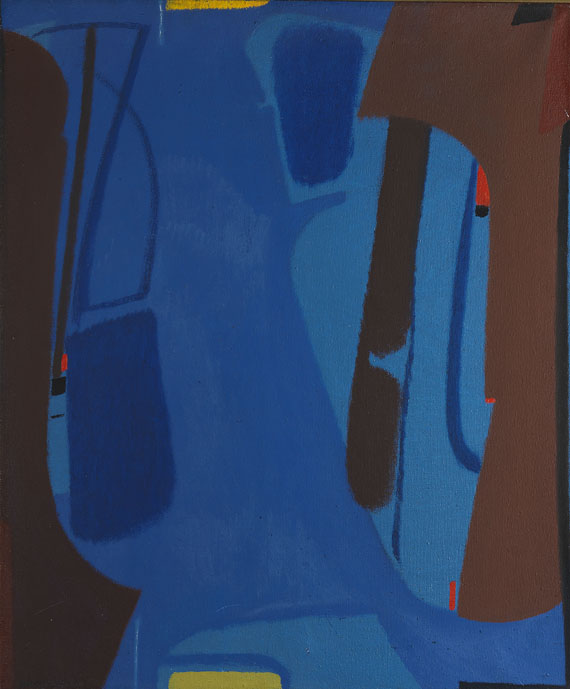 This work's authenticity has been confirmed by the Max Ackermann Archive, Bietigheim-Bissingen. The work is registered unter the interims catalog raisonné number ACK 5051.

Max Ackermann first studied in Weimar under Henry van der Velde and in Dresden under Gotthardt Kuehl. He then went to Munich and attended Franz von Stuck's painting class at the Akademie from 1905 to 1909. At the age of twenty-five Ackermann met the painter Adolf Hölzel in Stuttgart, who encouraged him to begin abstract painting and influenced his further work considerably. Ackermann began painting abstract works in 1912, but also continued painting figurative scenes until the 1940s. His first solo exhibition of figurative and abstract paintings, pastels and drawings took place in 1924 at the Stuttgart ’Kunstgebäude’. When the artist met Rudolf von Laban, the founder of abstract dance, in 1921, they began to have a lively discussion about dance script and counterpoint, which inspired Ackermann to his blindfold rhythmical drawings. Ackermann opened a 'Lehrwerkstätte für Neue Kunst' (Teaching Workshop for New Art) in his studio, where he held holiday courses for young art teachers. He founded a seminar for 'Absolute Painting' at the Stuttgart Volkshochschule in 1930 and based lectures held three years later during a Hölzel exhibition at the Galerie Valentien in Stuttgart on the seminar subjects. When he was prohibited from teaching by the National Socialists in 1936, Ackermann retreated to Hornstaad on Lake Constance - a town which later attracted quite a number of painters. Other painters who settled here were Helmuth Macke, Otto Dix and Erich Heckel. When Ackermann's studio was destroyed in an air-raid in 1939, many of the artist's early works were burnt. After the war Ackermann presented his works in a first exhibition at the Salon des Réalités in Paris. He exhibited works in the Zurich exhibition 'Kunst in Deutschland 1930-49' in 1949. Ackermann and Wolfgang Fortner organized a seminar about painting and music in Hornstaad in 1952. This was followed one year later by another event about painting and architecture which was organized together with Hugo Häring and Kurt Leonhart. The 'Künstlerbund Baden-Württemberg' appointed Ackermann successor of the late Willi Baumeister in the 'Rat der Zehn' (Council of the Ten) in 1956.

Many his works were given titles for which Ackermann had been inspired by music. But also those without such titles, show references to music. If, as it is the case with this work, the blue is moduled top a brown and an expression bound to form is attained, we talk Lyrism. Several senses are appealed to, and that is not merely the sense of vision. If in Ackermann‘s art the "holy surface " was mentioned, then that is the very point through which his art is conveyed. Even though it is individually determined, it has a magic-universal aura.

Paintings from 1908 to 1967 were shown in a retrospective exhibition in Koblenz, Kaiserslautern, Constance, Wolfsburg and Cologne in 1967. In 1975 Ackermann died at the age of 88. [SM].