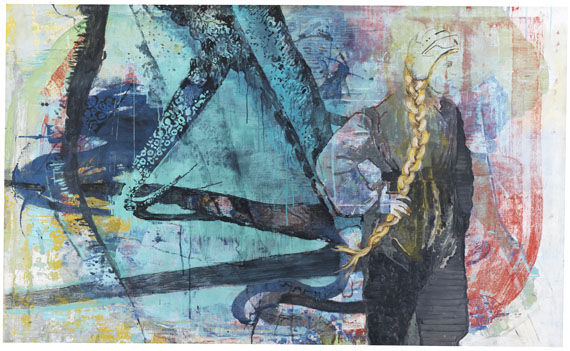 Born in Hilden in 1971, Miriam Vlaming at first studied sociology, education and psychology at the Heinrich-Heine-University in Düsseldorf. After completion she went to Leipzig in 1994, in order to study painting at the ‘Hochschule für Grafik und Buchkunst‘ (Academy of Visual Arts Leipzig) under Arno Rink. During her studies she founded the art and culture association “f-Raum“ in 1997. She received her diploma in painting and graphic art 1999 with honors. The following years she accepted calls to the ‘Hochschule für Technik, Wirtschaft und Kultur‘ and the ‘Abendakademie‘ in Leipzig and went on working stays to Kenya, Ohio and Israel as of 2001.

The models for Miriam Vlamig‘s works come from motifs from her own archive of more than 2000 photographs the artist made while staying in the U.S.A. Just as it is the case with this work “Weggefährten“, she alienates motifs almost to incognizance. Through wash-out and overpainting she creates multi-layer compositions, in which figurative and abstract elements merge in a fascinating manner.

She has received international honors in exhibition in, among others, Berlin, Beijing, New York, Leipzig and Düsseldorf. The artist lives and works in Berlin. [KH].

More Information
+
Sell
Get a free appraisal for a similar object!
+
Register for
Miriam Vlaming
+
Buying from A-Z
+
Contact a specialist
Share