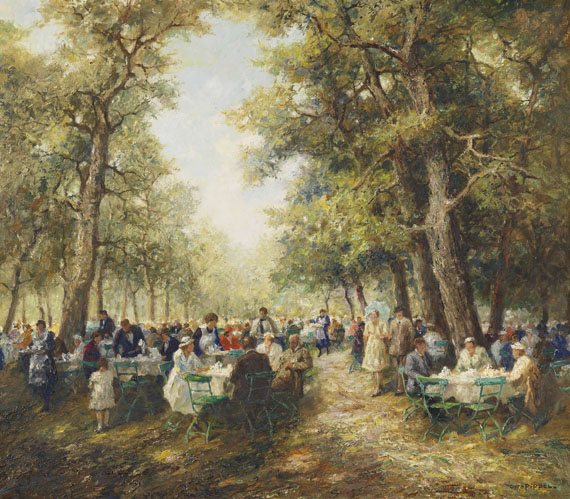 We are grateful to Wolfgang Schüller, Munich, for his expert advice.

Otto Pippel received his education at, among others, the Strasbourg School of Applied Arts as well as at the academies in Karlsruh and Dresden, here he studied under Gotthard Kuehl. In 1909 Pippel went to Bavaria and lived in Planegg near Munich. The same year he went to Paris. Deeply impressed by French Impressionism he implemented features of this style in his work. Since around 1915 he regularly showed works in exhibitions, especially in Munich. After World War I Pippel returned to his house in Planegg.

This painting is yet another prime example of German Impressionism. Accordingly, the artist applied the paint in an impressionist manner characterized by short and swift strokes of the brush, partly pastose, then again glazing. Additionally Otto Pippel attained to capture the atmosphere of a summer’s day with great poise: Bright light falls through the trees onto the coffee tables idyllically set under the trees. Even though the guests have already taken their seats at the tables placed in the picture’s foreground, the observer feels invited to occupy one of the vacant chairs and to participate. Another impression that arises is that of looking over the artist’s shoulders during the process of creation.

Our picture was made in the artist’s later period of creation. The painter died in 1960 in his home in Planegg. [KP].