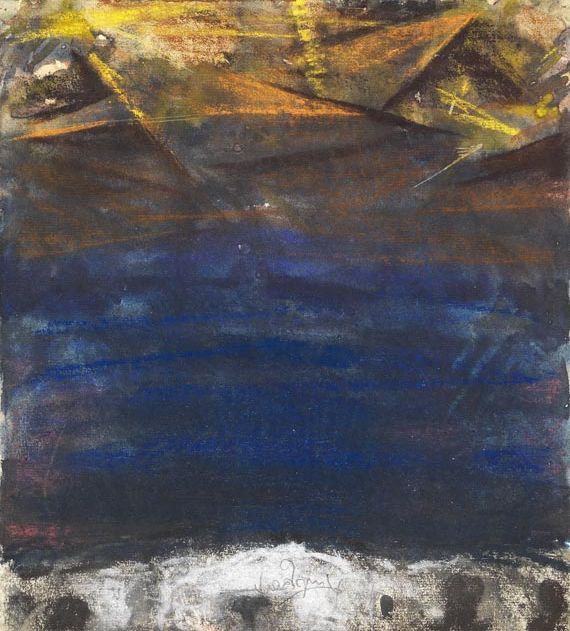 We are grateful to Mr Pierre Brullé, Paris, for his kind support in cataloging this lot.

František Kupka began his artistic training in 1887 at the Academy in Prague under Frantisek Sequens, an artist strongly influenced by the Nazarene School. Kupka moved to the Akademie in Vienna in 1891, where he worked under Professor Eisenmenger until 1893. In the following year he traveled to London and Scandinavia and finally settled in Paris in 1895. Like Lyonel Feininger and Marcel Duchamp, Kupka began working as a caricaturist and illustrator. He made fashion drawings, designed posters, illustrated books and made sketches for various satirical journals. In 1905 the artist moved to Puteaux, a suburb of Paris. Here he met Jacques Villon, who introduced him to a circle of painters which included Marcel Duchamp, Robert Delaunay, Fernand Léger, Francis Picabia and others in 1910/11. These artists discussed the difficulties of form in Cubism and Futurism, the links between painting and music. A decisive change took place in Kupka's work: as the first artist in France he abandoned Art Nouveau for abstraction. The general acceptance of the ornament as an independent element of Art Nouveau led him to the final abandonment of the natural form.

Besides a comprehensive oeuvre dedicated to non-figurative painting with which the name Kupka is normally identified, there is also a figurative creation which originates from the same time and from a slightly earlier period. Our work belongs to this part of his oeuvre. The dark mythically elevated was a popular theme in painting before World War I. The range of possible interpretations reaches all the way to the vibrant transfiguration of the night with all its suspense, enchantment and seduction. It is not night ‘s romantic closeness to nature, as it was perceived in the early nineteenth century, it is the sensual and sinful component, the opposite of the day’s reality, that artists of these days were fascinated by. The sensation of the night is celebrated as an own experience. Frantisek Kupka also sees the secret seduction of his night, he visualized it both romantic and yet threatening. [KD].

The group around Villon called itself 'Section d'Or' and exhibited for the first time in 1912 at the Paris autumn Salon. Kupka exhibited his abstract works here, which are associated with Orphism because of their proximity to music. In 1914 he voluntarily enrolled for front-line service at the Somme. Four years later Kupka accepted a guest professorship at Prague university for two years, and in 1931 he was one of the founding members of the group 'Abstraction-Création' together with Hans Arp, Jean Hélion, Auguste Herbin, Georges Valmier und Georges Vantongerloo. Kupka became a member of the board of this group. This period was also determined by important exhibitions at the Museum Jeu de Paume in Paris. Kupka spent the years of the Second World War in Beaugency and returned to Puteaux immediately after the liberation. The first large retrospective exhibition took place in 1946 on the artist's 75th birthday in Prague. He participated in the documenta I in Kassel in 1955. Two years later Kupka died on 21 July 1957 in Puteaux. In the following year the Musée d'Art Moderne in Paris arranged a large retrospective exhibition. An entire room is dedicated to František Kupka in this museum.