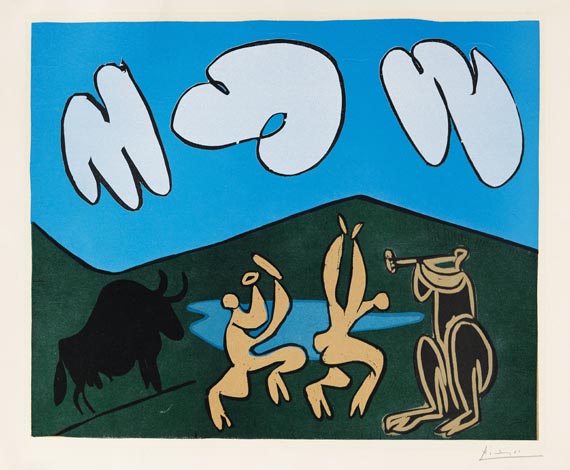 Around 1958 Pablo Picasso rediscovered an almost lost graphic technique. The linocut, particularly the linocut in colors, originally used to be Art Nouveau’s preferred printing technique. The easy to cut linoleum allows bolder compositions than the woodcut. Picasso made full use all conceivable opportunities this technique has to offer. This also enables him to a rather unorthodox approach, as it is the case with this sheet. Usually, both in woodcut in colros as well as in linocut in colors – the canon goes from light to dark, however, Picasso partly reversed this process in this piece of art. The light clouds were printed over the blue of the sky at a later point. The almost playful handling of the technique requires sound knowledge and Picasso is notonly an outstanding artist, but also an excellent craftsman. His comprehensive graphic oeuvre is a perfect exampole thereof. Picasso treats his subject just the way he treats the technique. Dancing faun figures that play the flute are among his preferred themes. Picasso‘s bucolica is always archaic and wild, they are part of a temper, which had enabled the artist to dare something extraordinary throughout his entire life.

Picasso is considered the paragon of a modern artist who is forever searching for new means of expression. His enormous oeuvre is full of contrasts, broke with all academic restrictions and liberated art in the 20th century. [KD].