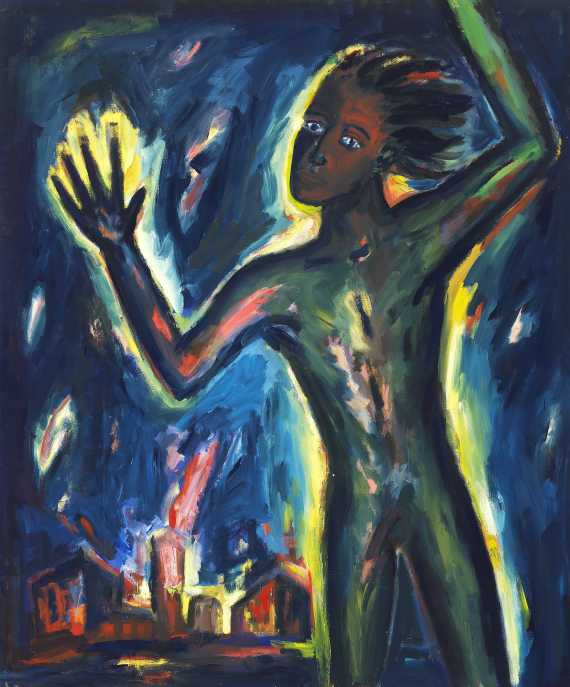 We are grateful to Mr. Helmut Middendorf for his kind support in cataloging this lot.

While studying 1973-79 at the Berlin ‘Hochschule der Künste’ [Art Academy] Middendorf experimented with many different contemporary possibilities for creating form. In 1975 his works were still dominated by sharply angular, three-dimensional shapes. However, at the suggestion of his teacher, Karl Horst Hödicke, the doyen of Berlin Neo-Expressionists, Middendorf switched in the late 1970s to working in a pointedly representational, painterly style. He is numbered among the ranks of the 'Young Wild Ones' who propagate 'vehement painting'. Middendorf varies themes chosen from his immediate environment and personal experience serially in different color combinations. In vehement gesture and lurid color, with the fall of light fulfilling an essential function in the composition, the artist catches the convulsive movements of dancers at the SO 36 Disco in Kreuzberg, Berlin or captures on canvas the pose of a rock singer, thus turning all these figures into 'modern icons'. In 1977 Middendorf and other pupils of Hödicke's founded the legendary 'Galerie am Moritzplatz' in Berlin-Kreuzberg, which showed films, photos and performances as well as painting, drawing and objects. Since 1979 Middendorf has been instructing experimental film at the ‘Hochschule der Künste’ in Berlin, a medium which he was even working in while he was a student, laying the groundwork for a parallel career. However, what made the artist famous overnight was a group-show of 'Vehement Painting' mounted in the early 1980s at the Berlin ‘Haus am Waldsee’, where work of his was shown together with work done by Rainer Fetting, Salomé and Bernd Zimmer.

After a study sojourn in New York in 1980, Middendorf moved to Berlin-Kreuzberg and intensively examined the impressions of life in the big city. "Painting is only interesting to me if the intensity that I experience in life becomes manifest in the intensity of my pictures. Of course, there is always something imaginary that comes along [..] I try to avoid depicting private things, my work has to go beyond that. It reflects the current situation in a wider context, and this is what I then work my pictures out from, trying to show moments that have some sort of duality, that reference me on the one hand and the overall context on the other. In best case an obvious picture that is beyond me is the result." (Translation of quote after: Künstler. Kritisches Lexikon der Gegenwartskunst, Munich 1988, p. 2).

The shock of impact, linked with the projection of desires, revealed by Middendorf's emotional analysis of everyday life in Berlin and New York, has yielded in more recent work to greater serenity. By reducing his palette and ultimately turning to new subject matter, the artist has returned to a state of experimental receptivity. As reflections on his life and where he has gone and is going as an artist, the late 1980s 'Black Pictures' signalize a new departure. [SM].