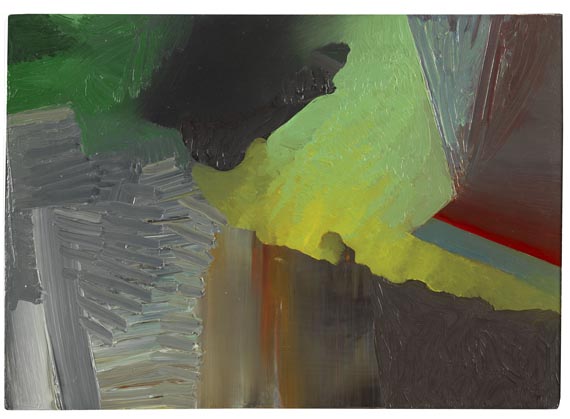 After his studies of painting in Dresden from 1951 to 1956 and the three years that followed as a master-class student at the Academy, Richter emigrated to the Federal Republic of Germany. A large cache of early work, long believed to have been lost, dates from that period. Only a few of these works have survived. From 1961 to 1963 he studied under Karl Otto Götz at the Duesseldorf Academy of Arts. It is there that he became friends with Sigmar Polke, Blinky Palermo and Konrad Lueg - who was later known as the art dealer Konrad Fischer - , with whom he performed the "Demonstration in favor of capitalist realism" as a German version of Pop Art in 1963. In 1962, influenced by Giacometti and Dubuffet, he started with representational paintings based on photographs. This was the result of a changed view on art, which, according to Richter, "has nothing to do with painting, composition or color". His first solo exhibitions took place in 1964 at the galleries of Heiner Friedrich in Munich and Alfred Schmela in Duesseldorf. In 1967 Richter became guest lecturer at the Academy of Fine Arts in Hamburg and in 1971 he was offered a chair at the Academy of Arts in Duesseldorf, which he held until 1996. Further visiting professorships from the College of Art in Halifax, Canada, in 1978 and the Städelschule in Frankfurt in 1988 followed. In his alpine and urban paintings of the end of the 1960s, the photographic pattern is reflected in thickly applied spots of color. With his color field series from 1971 to 1974, in which the artist he used the four primary colors faceted and in arbitrary combinations as well as his monochrome gray paintings of 1972-1975, Richter made decisive painterly components his subject.

After his gray paintings, which, according to Richter, marked a final point and a rejection of everything figurative, as they were "a suitable and only possible reaction to indifference, viewlessness, refusal to give evidence and shapelessness ", the artist turned to abstract paintings in a fulminant uprising as of 1976. "A complete startover seemed to be the only option had. This is how the first sketches in colors were made in uncertainty and openness, following the principle 'multicolored and complex', thus they are the opposite of anti-painting and a painting that has doubts in its legitimacy" (each transl. Of quotes after: Heribert Heere, Gerhard Richter - Die Abstrakten Bilder. On content cf. Preface of catalog for the exhibition in the Kunsthalle Bielefeld and in the Mannheimer Kunstverein e.V. 1982, p. 9). Parallel to the small abstract paintings, among which this work counts, the artist also created the large formats that were made in creation processes of varying lengths and in different painting steps. In these new and multi-faceted works, in which the lively and pulsating color plays a dominating role, Richter displays neither emotions nor thoughts, his sole intention is to trigger individual perception and sensation with the observer. "Painting in a sense of an incarnate hope, in order to bring the incomprehensible to light and to thus legitimatize it as something incomprehensible again: Hope for transgressing boundaries, for an expansion of our minds " (Heribert Heere, no place, p. 20). Being one of the first works from this innovative period of Gerhard Richter’s artistic development, this work has a particularly significant value.

In 1976 Richter started to do abstract pictures with colored streaks, but nevertheless returned to representationalism again and again and turned the alternation between techniques of representation and stylistic incongruity into a principle. In 1997 his "Atlas" - a systematic collection of photographs and painted sketches - was exhibited a the documenta X in Kassel. Today Gerhard Richter is regarded as one of the internationally best known and most successful contemporary artists, whose works are appreciated by a wide audience on numerous exhibitions. [NB]/[DB].