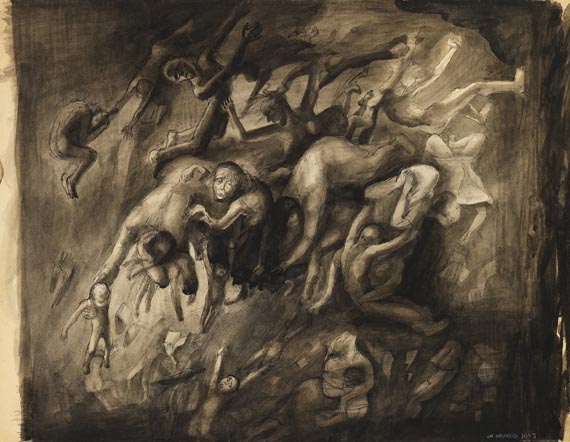 Lea Langer was born in Dresden on 23 March 1906 the daughter of Jewish merchants. She grew up in a bourgeois environment under the strictly orthodox-religious views of her father. Against her parents will she studied at the Dresden School of Arts and Crafts, the private art school "Der Weg - Kunstschule für Gestaltung", founded by Edmund Kesting and was accepted into the Dresden Academy of Art in 1923. In the following Lea Langer continued her studies in the master class of Otto Gußmann, together with Otto Griebel, Wilhelm Lachnit and her later husband Hans Grundig. During her studies she visited the Kunstsalon of Emil Richter and sees the cycle of 50 etchings "Der Krieg" by Otto Dix, which has decisive impact on her artistic creation. In 1926 she and Hans Grundig joined the KPD [Communist Party of Germany]. Their relationship is meet with great opposition from her family, their marriage in 1928 led to a break-up with the Langer family. In 1935 an occupation- and exhibition ban was imposed on the Jewish artist with communist views. In the following years she and her husband were arrested for high treason several times. Lea Grundig was sentenced to six months in prison in 1938. Later she was detained in a camp near Bratislava in Slovakia, she was released after paying ransom and can flee to Tulcea and eventually to Palestine in a odyssey that lasted several months. She managed to hide her most important works with friends and abroad. In Palestine Lea Grundig was detained in the camp Atlit, in 1942 she was released "stateless" and alternatingly lived with her sister in Haifa or her father in Tel Aviv. Cycles of drawings like the "Im Tal des Todes" (In the Valley of Death, until 1944) and "Niemals wieder" (Never Again, until 1950) originate from her time in Palestine.

Lea Grundig‘s artistic work has always been coined by an observation of contemporary events: initially she was occupied with the social situation of the working class, later she documented the terrors of the Holocaust. She filled her figures with a great deal of passion and a direct emotional expression, she gave distinction to them with her political opinion. The artist used every single sheet to attack fascism, to denounce insanity, inanity and blindness. "I always wanted to depict people so that the observer gets an idea of their misery and suffering and is enraged about it." (Translation of quote from Lea Grundig, Gesichte und Geschichte, Berlin 1958, p. 93). In her art she worked up the dramatic impressions made on her flight and the terrible conditions on the ship. On the few seagoing ships, the so-called ‘coffin ships‘, such as the "Pacific", those Jews that managed to flee the Holocaust were brought to Palestine at the risk of loosing their life. This work was presumably also made in this context. In a haunting manner she depicted the constriction and the people’s panic in the undefined and gloomy room. Lea Grundig‘s lifework was always dedicated to improving people’s lives. She must be seen in line with the socially committed and artistically innovative German Käthe Kollwitz. A work on paper from this time and of such high quality has never been offered on the international auction market before.

After World War II she could at first not return to Germany. After the state Israel had been founded, she was given a passport with the help of influential friends and could return to Dresden in 1949. Hans Grundig helped her to get a professorship at the Dresden School of Art in 1950. In the following years Lea Grundig made numerous landscape drawings and portraits, but also continued making political etchings. She died on a cruise to Israel in the Mediterranean Sea in 1977. [SM].

More Information
+
Sell
Get a free appraisal for a similar object!
+
Register for
Lea Grundig
+
Buying from A-Z
+
Contact a specialist
Share