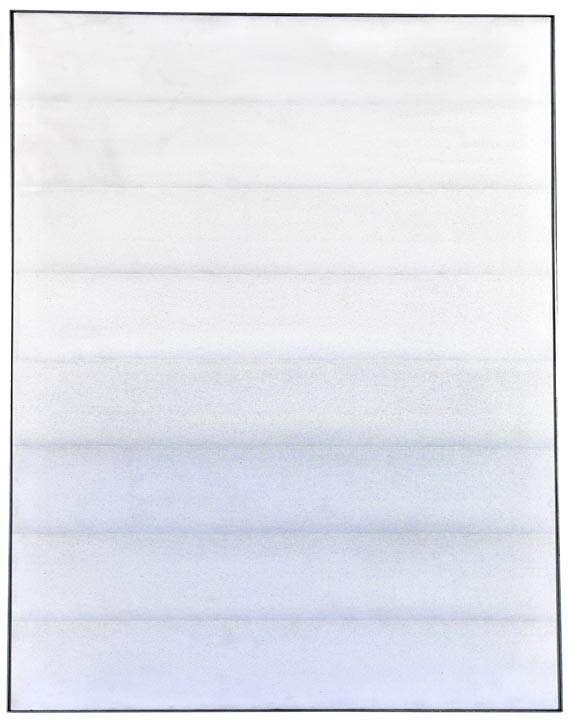 From 1951-52 Girke studied at the Werkkunstschule Hanover and subsequently attended the Staatliche Kunstakademie in Düsseldorf. The moulding gestures of the Informel which held way there he found to be subjective and lofty, and he developed continuously from the 1950s onwards an individual, formally reduced style of painting. Girke's quick success was proven by the awarding of the prize for painting of the city of Wolfsburg in 1959 and the youth art prize in Stuttgart in 1962. Between 1966 and 1971 he taught at the Werkkunstschule in Hanover before following a call to the Hochschule der Künste in Berlin.

In the 1960s he further developed his painting and limited the gradation of colors. The earlier arrangement principles of the painting surface, such as parallel layers of color in individual strokes of paint, and mesh-like serial structures, were to become characteristic for his whole oeuvre. Similar to artists of the group “ZERO”, Raimund Girke also put the color white into the center of his awkward creations, which gain their contemplative effect through the anonymized, fog-like application with the spraygun. In Girke‘s delicate works the observer encounters the color veil as an undefined space. A structure of various shades of white softly spreads across the canvas, which seems to disappear almost entirely if exposed directly to light. In a time of total stimulus satiation, Girke manages to take the observer to a state of concentration and contemplation with the calm presence of his works. Works from this important period of creation were exhibited, among others, at the documenta VI in Kassel in 1977.

In the 1980s and 1990s, the color palette was widened mainly around gradations of gray tones, the gestured moment of the brush stroke was intensified anew. The personal flow was nearly totally neutralized in Girke's serial, structural arrangements but nevertheless his works were formed by tension between sobriety and emotion. Since the 1980s Girke's art plays a fundamental role in painting in Germany. In 1995 the artist received the Lovis-Corinth-prize. Raimund Girke lived and worked in Cologne and Berlin until his death in 2002. [JS].