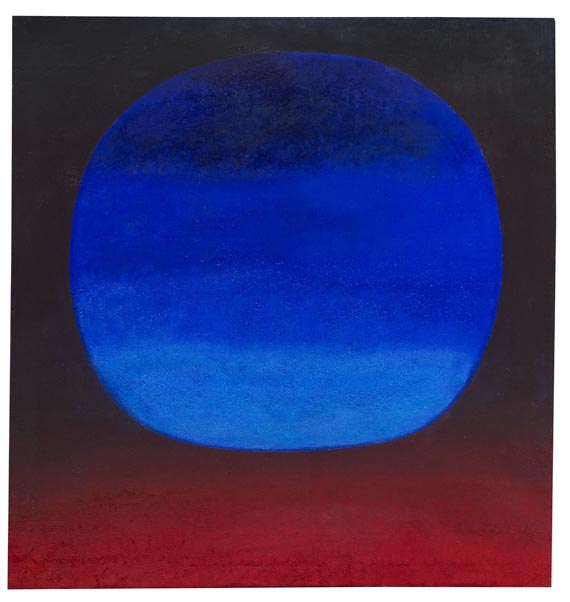 Rupprecht Geiger was born in Munich in 1908 as the only child of the painter and graphic artist Willi Geiger. He spent his childhood and his youth in Munich and in the foot-hills of the Bavarian Alps. In 1924 his family moved to Spain for one year where Geiger attended the "Colegio aleman" in Madrid and accompanied his father on his trips to the Canary Islands and to Morocco. Geiger made his first drawings and water-colors during this period. One year after returning from Spain, in 1926, Geiger attended Eduard Pfeiffer's architectural class at the Kunstgewerbeschule in Munich. He graduated as an architect in 1935 and spent half a year in Rome together with his father. Geiger then worked in a Munich architect's bureau until 1940 when he was sent to the Russian Front. Typical of this period are his dark-colored landscapes in watercolor. Geiger returned to Germany for a short period in 1942 before his father helped him to get a job as a war painter in the Ukraine. Geiger returned to Munich after the end of the war. His first abstract work was exhibited in 1948 at the "Salon des Réalités Nouvelles" in Paris. One year later Geiger joined up with Baumeister, Matschinsky-Denninghoff and Winter and founded the group "ZEN 49". Geiger discovered his true style during the 1950s. He integrated the futurist style of the Sixties, which was influenced by space research, into his abstract and colorful compositions. He repeatedly showed works at the documenta in Kassel between 1959 and 1977.

Rupprecht Geiger‘s reduced paintings from the late 1950s and the early 1960s are among the most sought after works by the artist on the international auction market, especially since the great success they achieved in auctions at both Christie's New York (March 2007) and Sotheby's London (July 2008). Next to rectangles, it is particularly the circle as an allegory for concentration which is in the focus of the much celebrated protagonist of German color field painting. Through subtle color modulations the artist creates meditative color spheres. In contrast to the neon tones of his later creations, the color palette of the 1960s is still dominated by a warm red and subdued shades of blue, which spread across the canvas in soft modulations, as it is the case with this work, letting the exactly separated color fields appear in an spherical light.

He gave up working as an architect in 1962 in order to concentrate on his painting. In 1965 Geiger was appointed professor at the Akademie in Düsseldorf, a post that he held until 1976. Geiger's typical works from the middle of the 1970s are rectangular or oval shapes, preferably in synthetic shades of red paint, which he sprayed onto the canvas. Geiger has been a member of the ‘Akademie der Schönen Künste’ in Munich since 1982. In 1987 he was commissioned with the sculpture "Gerundetes Blau" for the cultural center Gasteig in Munich. At present Geiger lives and works in Munich. Rupprrecht Geiger's abstract color compositions make him one of the most important artists of "Farbfeldmalerei" (color field painting) in Germany. [JS].