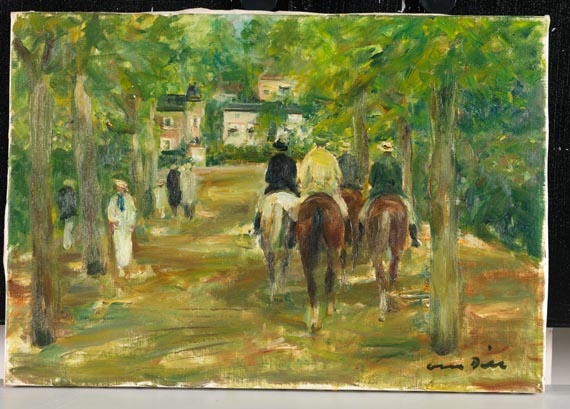 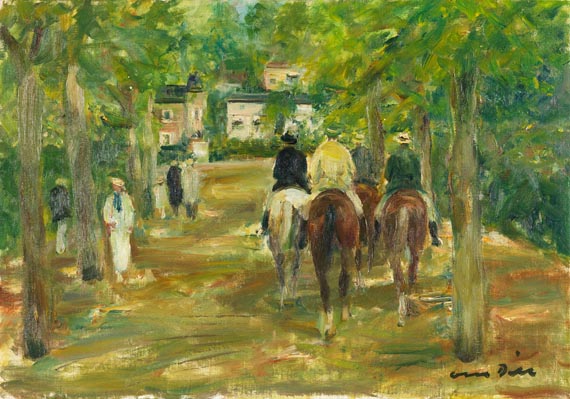 After an apprenticeship as a publishing salesman Otto Dill studied painting at the Akademie in Munich from 1908 to 1914, soon advancing to Heinrich Zügel's master pupil, with whom he spent the summer months in Wörth on the Rhine river. At the beginning Dill was strongly influenced by his teacher. His favourite subjects beasts of prey, which had interested Dill from his early youth. No less important, however, were hunting and horse scenes such as horse races or polo games. In 1914 Dill volunteered and was transferred to the Bavarian Ministry of War due to an illness in 1916. He married Emmy Dorothea two years before the end of the war and rented a studio in Munich one year later. The artist exhibited his first works in the summer of 1917 at several Munich Glaspalast exhibitions of the Künstlervereinigung. He was appointed professor in 1924. Numerous trips took the artist to North Africa, Italy, France, Spain and other places. Many paintings, which are clearly influenced by French Impressionism, reflect Dill's experiences from these journeys. After his move from Munich to Neustadt on the Weinstraße in 1930 Dill concentrated on landscapes in his surrounding: vineyards, fields, views of Neustadt, Niederkirchan and Bad Dürkheim, where the artist settled in 1941.

Otto Dill depicted his motifs, horses were among his most favorite ones, in an impressionist manner. With the lighting, the choice of colors and the easy impressionist stroke of the brush, the painting shows a relaxed summer's day in the park. Dill's pictures of horse carriages and paintings of horseback riders in parks "are suffused by light that is cast through the foliage onto horse and rider, the walkers on the side of the path. The glimmering light, dawning in the shade, embeds nature and figures in an idyllic and atmospheric world." (Wilhelm Weber, Otto Dill. Leben und Werk, Neustadt an der Weinstraße 1992, p. 56).

An air raid destroyed most of Otto Dill's work in 1943. Bad Dürkheim made Dill an honorary citizen in 1949, in the same year he was appointed honorary member of the Akademie der Künste in Munich. In the 1950s Dill travells within Germany and to Locarno. In 1957 he dies aged 73 in Bad Duerkheim. [SM]