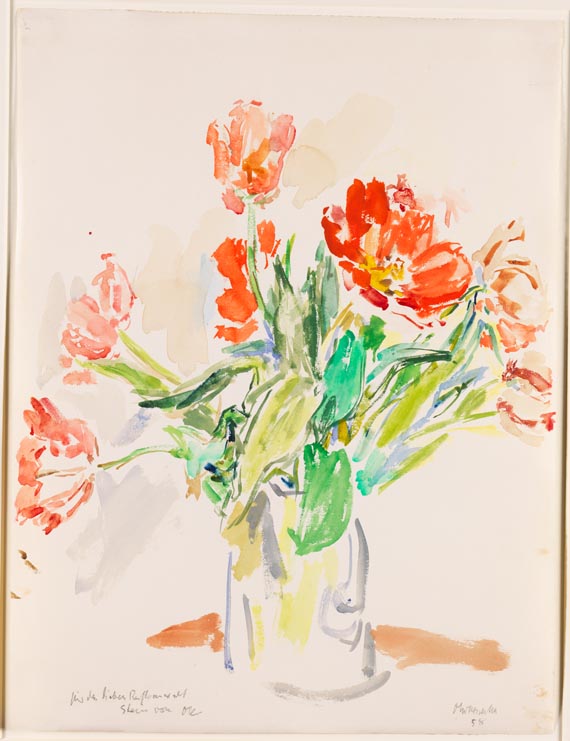 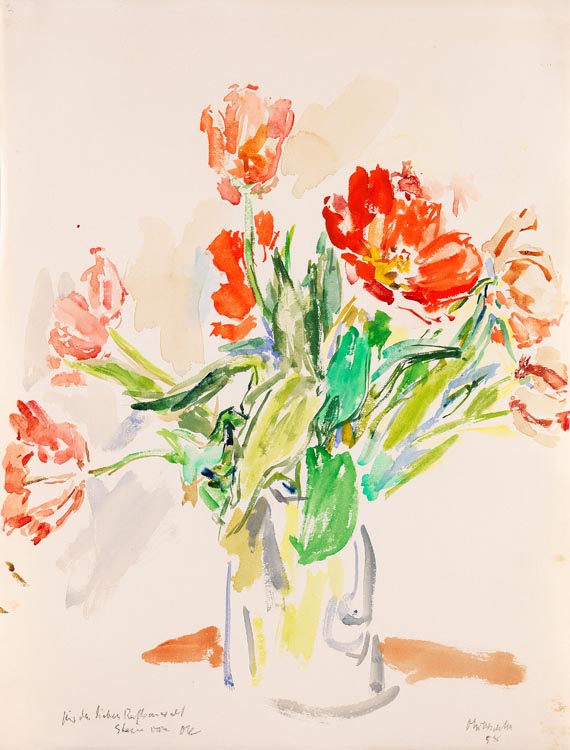 The work will be included into the forthcoming catalog raisonné, which is currently prepared by Alfred Weidinger and Alice Strobl.

Oskar Kokoschka, a goldsmith's son, grew up in Vienna. While attending the Kunstgewerbeschule there from 1905 until 1909, he was already working at the Wiener Werkstätte, founded by Josef Hoffmann in 1903. Kokoschka's illustrations and prints of that period reveal the influence of Viennese Art Deco whereas, apart from van Gogh and Hodler, the Viennese Secession was important for his painting. From 1910 in Berlin, he worked on Herwarth Walden's magazine 'Der Sturm', contributing not only drawings but also publishing his writings, among them the play 'Mörder, Hoffnung der Frauen' ['Murderers, Women's Hope']. A liaison with Alma Mahler lasted from 1911 until 1914. His early work, cycles of lithographs as well as visionary pictures and portraits, is steeped in psychical drama. Enlisting in the Austrian cavalry in 1914, he was severely wounded and discharged to Vienna in 1916. That year he met the actress Käthe Richter in Berlin and moved with her to Dresden. There Kokoschka was appointed professor at the Art Academy in 1919 but gave up the post in 1924. The years that followed saw him based in Paris and travelling constantly. He did not return to Vienna until 1931. Appalled by the radical right-wing tendencies he encountered there, Kokoschka moved to Prague in 1934. In 1937 the National Socialists confiscated 417 of his works. A year later the artist emigrated to London, where allegorical subject matter with political thematic overtones began to inform his pictures. He spent time in Switzerland in 1947 on the occasion of the large-scale retrospectives of his work mounted by the Basel Kunsthalle and the Zurich Kunsthaus. Then trips to Salzburg, Hamburg and the United States followed, where he taught at the Minneapolis School of Art in 1952. Kokoschka moved to Lake Geneva in 1953 and that same year began teaching a course he called the 'School of Seeing' under the auspices of the International Summer Academy of Fine Art at Salzburg.

The filmy watercolors of flowers that Kokoschka created in a rich coloring in his last years are a prime example of a technique that somehow stands in the shadow of oil painting, as it is rather sketchily. However, it is rather the lucid colors and their flimsy materiality that make for a unique color moment that cannot be achieved by opaque oil paintings. In our watercolor Kokoschka delivers proof of his mastery in handling this difficult technique that does not leave room for any corrections.

He received numerous honours during those years and exhibitions and retrospectives of his work were mounted by, among others, the Tate Gallery in London (1962) and the Staatsgalerie Stuttgart (1968). He again turned to making prints, producing more than two hundred lithographs and etchings, most of them in cycles. In February 1970 the artist began to write his autobiography, 'Mein Leben', which was published a year later and appeared in 1974 in English as 'My Life'. Kokoschka died in Montreux on 22 February 1980. [KD].