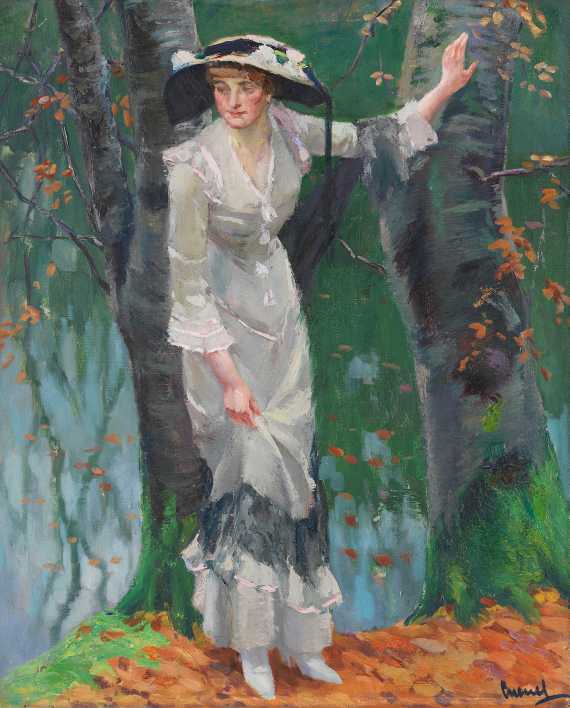 This work is accompanied by a certificate of authenticity by Mr Helmut Krause, Mörfelden-Walldorf, dated 22 January 2010. This work will be included into the forthcoming catalog raisonné.

Edward Cucuel was born the son of a newspaper publisher in San Francisco. As early as at the age of 14, he attended the local academy of arts. Still a teenager, he was employed as an illustrator for the newspaper 'The Examiner'. When the 17-year-old Cucuel was sent to Paris he entered the Académie Julian and the Académie Colarossi. Then he went to Jean Léon Gérôme at the Académie des Beaux Arts. In 1896 Cucuel returned to the USA and settled in New York. After half a year, during which he worked again as a newspaper illustrator, Cucuel went back to Paris to devote himself to liberal arts. He spent two years there, and then traveled through France and Italy to study the old masters. In Germany, Cucuel went to Berlin where he mainly worked as an illustrator. In 1907 Cucuel moved to Munich, the city that should become his home for a long time. There he joined the artists' group 'Scholle', which was dominated by the outstanding artistic figure Leo Putz. The group took care of him in artistic matters. Furthermore Cucuel took part in the exhibitions of the Secession in Munich. In 1912 the artist successfully exhibited some of his works in Paris. His paintings resemble the French Impressionists as to color and motives. His favorite motives are portraits of women and nudes in light-flooded interiors, plein-air-representations with social scenes and charming Bavarian landscapes.

Edward Cucuel’s works from after 1911 are characterized by a cheerful and light-suffused coloring and a free and flowing stroke of the brush. Cucuel is a master of open-air painting, which he at first executed for four years in Hartmannsberg on Chiemsee, together with his friend and teacher Leo Putz. He spent the war years between 1914 and 1918 in Holzhausen on Lake Ammer, where he resided on park-like premises with direct access to the lake. Here he also put his glamorously dressed models in scene in varying open-air depictions and thus created an interesting contrast to the nature‘s rural nativeness. The white of the tenderly laced dress is in contrast with the green of the lake's calm and reflecting surface. This work with its delicate color nuances presumably is one of the few paintings of Lotte von Marcard, the artist’s wife, which Cucuel also depicted in the same dress and with a similar dreamy expression on other paintings. (cf. Fritz von Ostini, Der Maler Edward Cucuel, Zurich/Vienna/Leipzig 1924, plate in colors between pp. 18 and 19).

Edward Cucuel put up studios in Munich and Starnberg, where he regularly spent the summers as of 1928, whereas he regularly lived in New York during the winter until 1934. Because of the beginning of Word War II, Cucuel finally left Germany in 1939. He settled in the Californian town of Pasadena, where he led a secluded life until his death in 1954. [JS]. 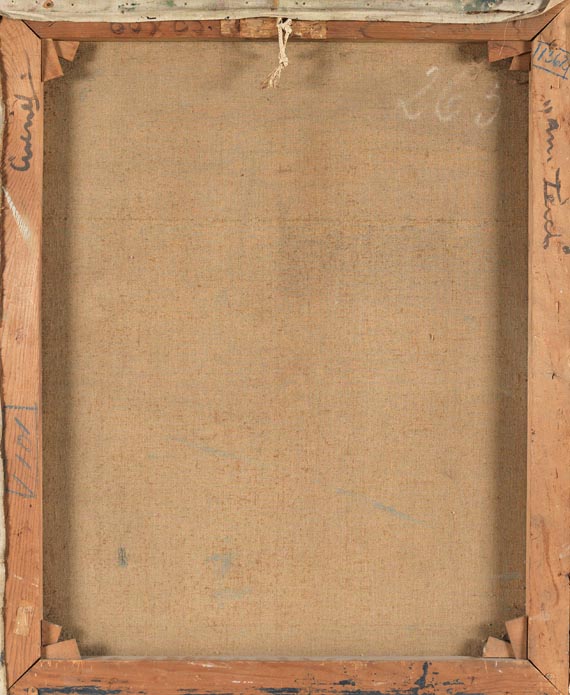