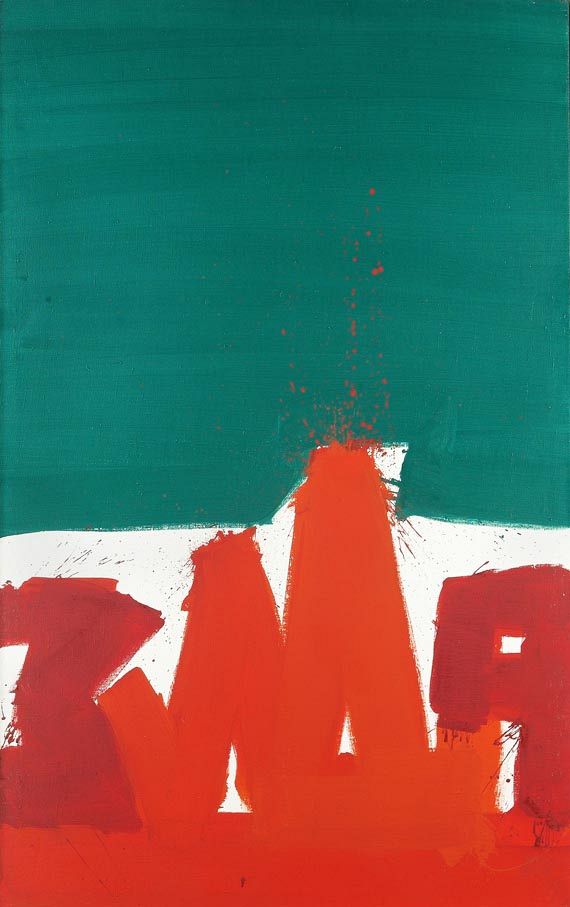 Born on 21 March 1932 in Innsbruck, Markus Prachensky moved after taking the examiniations qualifying him for university entrance to Vienna in 1952, where he began ot study architecture at the Fine Arts Academy under Lois Welzenbacher. In parallel, Prachensky studied painting from 1953. Joining forces with Wolfgang Hollegha, Josef Mikl and Arnulf Rainer in 1956, he co-founded the group of artists known as “Galerie nächst St. Stephan”, whose chief patron was the distinguished ecclesiastic and art historian Monsignore Otto Mauer. By 1957 the group had been launched with a large exhibition by the Viennese Secession and Prachensky became a member of Secession. While working in Paris in 1958, he met other celebrated contemporaries, including Jean Arp, Pierre Soulages, Yves Klein and Sam Francis. In 1959 Prachensky demonstrated “peinture liquide” for the first time at the Theater am Fleischmarkt in Vienna and took part in documenta II in Kassel. In the early 1960s Prachensky spent quite a bit of time in Berlin and Stuttgart, where he produced the series “Rot und Rot - Berlin” [“Red and Red - Berlin”] as well as his “Solitude” series. Although his early works still followed the principles of stringently geometric composition, Prachensky developed a distinctively expressive Tachist style in the 1960s that was oriented towards international Informel.
In both the “Solitude” pictures and the “Suicide” pictures, energy-charged red brush strokes, edgily cantilevered at crisp angles reminiscent of script signs, are squashed into powerful monochrome color surfaces. Although many of the ominous color surfaces of the “Solitude” still glow in vibrant greens and orange tones, the expression of menace in the “Suicide” pictures has been noticeably heightened, notably in the palette. Now Prachensky tended to work in black and purple, which, as in the present painting, can also shade into greenish black. At the centre of our work, the dark color surface finally seems to collide with the powerful red linear configuration. Bright splashes of red spurt out like blood across the dark canvas.
Until the mid-1970s, Prachensky’s painting concentrated on reds. Impressions gained in Italy enlarged his palette to include black and yellow. Mediterranean landscapes, the colors and forms of Italy, were at the core of his cycles during the 1980s and 1990s. Prachensky taught and was the director of the master class in painting at the Viennese Academy from 1983 to 2000. The artist was awarded the Medal of Honour in Gold of the City of Vienna in 1992. He was awarded the Prize of the City of Vienna for Fine Art in 2003. Grand retrospectives were mounted at the Kunstverein Hannover (1970), the Viennese Academy (1979) and, in 2002, on the occasion of Prachensky’s seventieth birthday, at the Österreichische Galerie im Oberen Belvedere. In 2003 works of Prachensky’s were shown at Galerie Ulysses in Vienna and in the Essel Collection, Klosterneuburg. Markus Prachensky is considered the most important exponent of Informel in Austria. [JS].