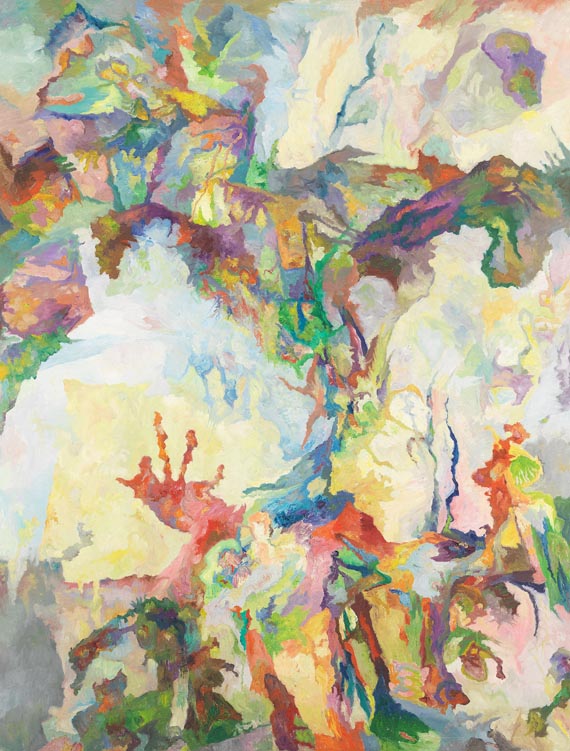 Tag der Ziegen und anderer Tiere. 1991.
Oil on canvas, in two parts.
One signed and dated lower right. Each signed, dated, titled and inscribed "Teil 1" and "Teil 2" respectively on the reverse. 260 : 200 cm (102,3 : 78,7 in)Each 260 x 200 cm (102 x 78,7 in) Bernard Schultze was born on 31 May in Schneidemühl (West Prussia). After his Abitur he studied at the art academies in Berlin and Düsseldorf from 1934 to 1939. His entire work produced before 1945 was destroyed during an air raid on Berlin in 1945. Schultze moved to Frankfurt two years later where he began making his first informel paintings in 1951. An exhibition of the artist group 'Quadriga' in 1952, of which he was a co-founder, in the 'zimmer galerie franck' in Frankfurt included works by the artist. The group's aim was to move away from figurative and formalistic abstraction towards the international avant-garde movements Action Painting and Tachisme. In 1955 Schultze married the painter Ursula Bluhm and he made his first relief paintings with different materials stuck onto the canvas. The so-called 'tabuskris' (tabulae scriptae), works combining painting and drawing made from 1957, were followed by the 'Migofs' in 1961. This name, invented by Schultze, refers to constructions and creatures, which, in his eyes, exist among the creatures of nature. He travelled regularly to Paris and New York during this period, before moving from Frankfurt to Cologne in 1968. He travelled to Russia, the USA and Asia. He was elected a member of the Akademie der Künste in Berlin in 1972. Since 1974 his works became increasingly larger until he conquered the expanse of large paintings in the 1980s. Schultze achieved an important late woke, on which he worked intensively until his death on 14 April 2005. His work has been awarded a number of prizes: he was honoured with the title of a 'Titularprofessor' of the state of North Rhine-Westphalia in 1981; he was awarded the Großer Hessischer Kulturpreis in 1984, the Lovis Corinth Prize in 1986 and the Stefan-Lochner-Medal of the City of Cologne in 1990. Important exhibitions have been dedicated to the artist's work since the 1980s, for example the extensive retrospective exhibition in Düsseldorf, Berlin, Frankfurt and Saarbrücken in 1980/81 and the retrospective exhibition of his graphic work in the Albertina in Vienna and other museums in Germany in 1984.

This impressive work dating from the early 1990s is stunning, with colour spaces growing rampantly like foliage to open up a way into the picture space. The perspectives that lead the viewer’s eye in stages into the foreground, the middle distance and the background defy rational analysis. Instead spatial depth suggesting whirlpools and ravines develops out of rampant growth. It takes a while to spot the distorted beings pervading the two-part composition like splinters of thought.

A large selection of his works toured to Cologne, Bologna and Budapest between 1994 and 1996. Schulze belonged to the last great names and precursors of German postwar-abstraction. [BR]
EXPERTISE: We are grateful to Dr. Barbara Herrmann, Cologne, for her help in cataloguing this lot. The work will be included in the forthcoming catalogue raisonné
PROVENIENZ: Private collection Germany.
AUSSTELLUNG: Bernard Schultze. Das große Format, Museum Ludwig in der Josef-Haubrich-Kunsthalle, Cologne/Galleria Comunale d'Arte Moderna, Bologne/Szépmüvészeti Múzeum, Budapest/Kunsthalle Elzenveld, Antwerp 1994, cat. no. 60/61 (with full-page illustration)