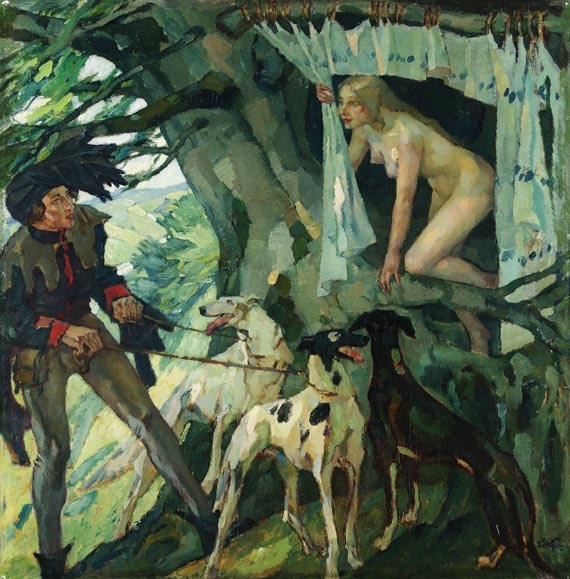 Märchenprinzessin im Baum. Nach 1933.
Oil on panel.
Compare Putz 1134 until 1137. Signed lower right. 69 : 67,7 cm (27,1 : 26,6 in). Leo Putz enjoyed working with fairy-tales and motifs from myth and legend and interpreting them in his own way. Here, too, he is primarily concerned with representing a beautiful female body, as is obvious from his rendering of Genevieve’s seductively slender body. The narrative thrust of the composition refers to an earlier conception of narration which Putz for the most part eschewed in later works to concentrate more on the painterly statement as such. A certain naiveté in the rendering is counterbalanced by the freshness of the painting and forged into a taut composition by a master hand. Even the detail of the three dogs in the foreground is important for its role in the overall composition. [KD]
EXPERTISE: This work is accompanied by a photo expertise signed by Leo Putz, estate Prof. Leo Putz Gauting, and dated 4 May 1996
PROVENIENZ: Private collection Switzerland.
Galleria Goethe, Bolzano.
Private collection South Germany.

As far as it is known, Leo Putz all in all dealt five times with this subject with the original title "Genoveva". Our work is counted among the three main versions
In good condition. Partially with minor retouchings as well as rubbed edges due to the framing. Outer right centre edge minimally bumped.