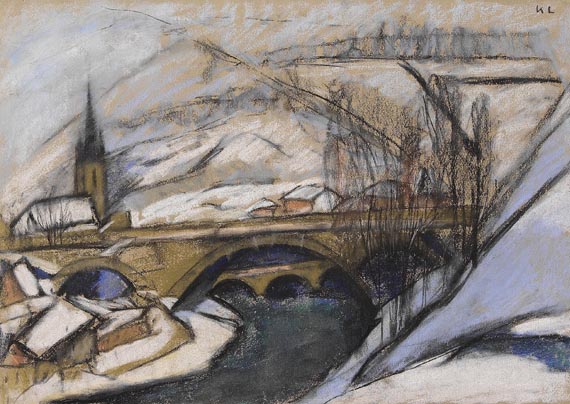 Winterlicher Gebirgsort mit Brücke. 1910/20s.
Coloured chalk.
Monogrammed upper right. On light grey paper. 34,4 : 49 cm (13,5 : 19,2 in), the full sheet. In 1895, Käthe Loewenthal began to study with Ferdinand Hodler. On a trip to Paris she met Leo von König and followed him to his Berlin art school. In 1905 Käthe Loewenthal settled in a studio in Munich. She moved to Stuttgart in 1914 and studied with Adolf Hölzel. During the two decades that followed, she freelanced as a painter in Stuttgart. Because she was Jewish, Käthe Loewenthal was forbidden to paint in 1935. She was transported to an internment camp in 1942 and died soon afterwards. Since the works she had in storage were destroyed in 1943, very little of her œuvre has survived. The present drawing shows a characteristic Loewenthal landscape. With assured handling of line and colour, the artist has memorably captured the depth of the landscape and a bleak wintery mood. [NB]
EXPERTISE: We are gratedful to Prof. Dr. Wolf Ritscher, Käthe Loewenthal Förderverein, Unterreichbach, for his help in cataloguing this lot
PROVENIENZ: Private collection South Germany.